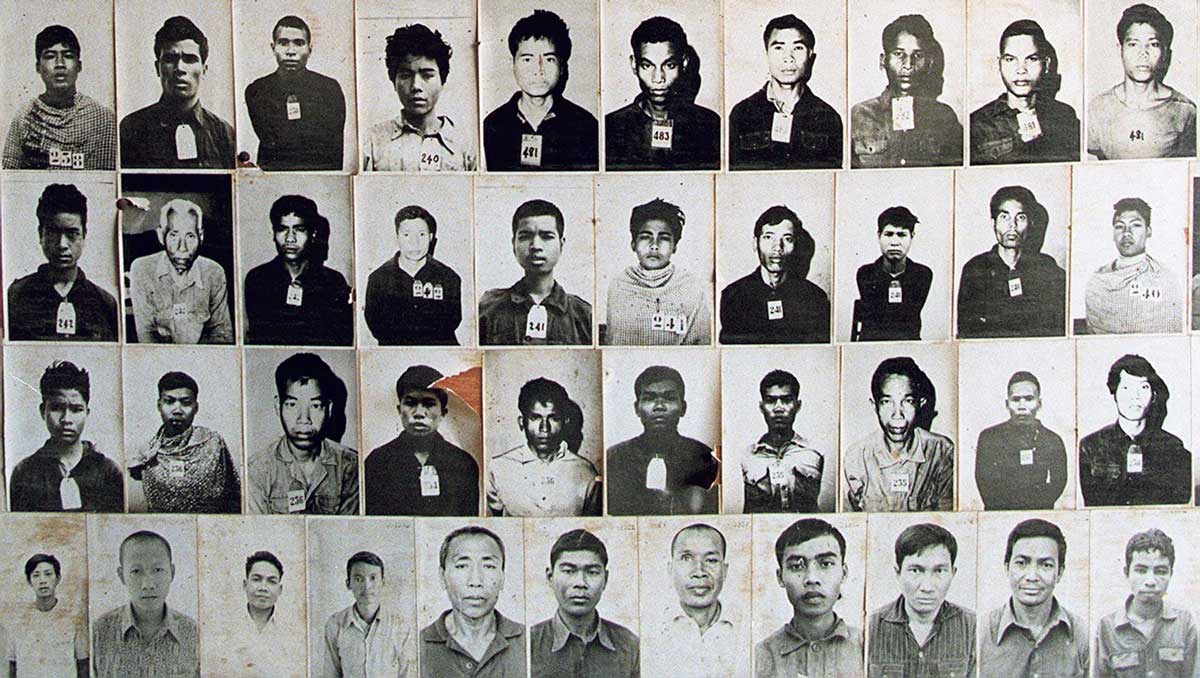 Being Cambodian means having your life touched by the Khmer Rouge. The regime was in power for only three years, eight months and 20 days, but was responsible for an estimated 1.7 million deaths, about a quarter of the population. The scars are visible forty years after his fall in January 1979. It is rare to meet people who have not suffered horror or who have inherited a family trauma.

How can you tell the story of a regime that has undone countless lives? in the When the clouds fell from the skyJournalist Robert Carmichael traces the story, which was capitalized by a single victim, Ouk Ket. In June 1977, Ket left his French wife and two small children in Paris to return to Cambodia. After nearly a decade abroad – as a student and then a diplomat – Ket had built a life beyond the civil war and US bombings that tore the country apart in the early 1970s. When the Khmer Rouge took control in April 1975, Cambodia fell silent. Refugees who had fled to Thailand or Vietnam told of the brutality of the regime, but made little impression on the world stage. When the State Department asked Ket and many other foreign Cambodians to return home, many did.

"Come to Cambodia to get training and do your job better," the letter said. Like many of his countrymen, Ket was a patriot. The opportunity to reunite with his parents and siblings and help rebuild his nation proved irresistible. "He returned in this state with complete confidence," his wife Martine said to Carmichael three decades later.

Although his family would not learn it for years, Ket's hopes were destroyed when they landed in Phnom Penh. Carmichael uses reports about surviving returnees to describe how the trip would have gone. He was sent almost immediately to S-21, the regime's security center, which was reserved for the enemies of the state. He was detained, starved, tortured, and forced to confess an absurd litany of crimes for six months. He was executed on December 9th.

Inspired by Mao Zedong's interpretation of Marxism, the radical communist state that Pol Pot was persecuting had little historical background. The democratic Kampuchea was supposed to be an agricultural utopia, an ethnocentric nation in which the Cambodians sought the same innate Khmer genius that had allowed their ancestors to build the Angkor Wat temples. On April 17, 1975, Phnom Penh fell to the Khmer Rouge, who started the dismantling of state and social structures and dispersed the population into one of the largest forced population movements in modern history.

This did not happen in a vacuum. Although Cambodia was not involved in the Vietnam War, the U.S. has thrown an estimated 500,000 tons of explosives on the country in recent years to evict the North Vietnamese armed forces. In the midst of this turmoil, a coup d'état replaced Prime Minister Norodom Sihanouk (who had resigned) with the corrupt, U.S.-backed General Lon Nol. The civil war broke out and Sihanouk joined the Khmer Rouge partisans, which brought them broad support. When the Khmer Rouge took Phnom Penh, many celebrated.

In the early 2000s, just a few years after the official surrender of the last Khmer Rouge, national and international pressure on the judiciary increased. It took years of political and legal struggle. Cambodia's Prime Minister Hun Sen was a young Khmer Rouge commander who emigrated to Vietnam in the same year as Ket's. The nation's other two leaders, Chea Sim (who died in 2015) and Heng Samrin, took similar paths to power. Among them, countless members of the ruling party – not to mention the hundreds of thousands who were amnestied under the 1997 capitulation agreement – served the Khmer Rouge.

Any court listing crimes against humanity will always be limited in scope. But none was nearly as limited as that in Cambodia. The extraordinary chambers in the courts of Cambodia were established in 2006. Only two proceedings against the five "most responsible" or highest executives have been initiated. Two further investigations against four middle-level commanders have come to a standstill. The government, which ranks a number of Khmer Rouge defectors among its top ranks, insisted that no cases would go after the first two. After the death of one defendant and another dementia, only three people – leaders Nuon Chea and Khieu Samphan, and S-21 inmate Kaing Guek Eav, aka "Duch" – were held responsible for the regime's crimes.

Few journalists have studied the Khmer Rouge Tribunal as closely as Carmichael, whose book reveals the complex, often contradictory nature of international justice. What justice can you have when weighing up such crimes? It is a subject that victims and observers have struggled with from the start. For several years Carmichael and I sat side by side in the tribunal press room. When I read his book years after the trial ended, it felt like an answer. The book is like tracing paper and layers Ket's life over Cambodia's sad story. The interaction between Martine and Ket's daughter Neary led to this extraordinary story.

The process was straightforward. The prison guard was not an ideologist, but the ideal bureaucrat. As a former school teacher, he had an almost pathological desire to please. Duch's meticulous records of each prisoner's entry and execution dates and insistence on written confessions provided the court with countless pieces of evidence that at least 12,000 people had been murdered.

The court scenes rivet. Duch states that he was very sorry, a remorse that only a few of his victims owe and that is repeatedly undermined by his persistence that he just did his job. For Martine and Neary, who have traveled to Cambodia to testify before an extremely imperfect court, the confrontation with Duch offers an opportunity that few will have. After talking about her hunt for her husband – when she was persecuting Chinese and Cambodian officials and scraping funds in 1979 to visit the extensive refugee camps on the Thai border to learn that he had died years ago – Martine speaks of this Pain that his absence has caused you and your family: "You have destroyed our lives." When Duch offers his flat answer, Martine takes off her headphones. "It sucks Duch," Carmichael remarked cleverly. Neary describes the visit to the S-21, which became a museum in the early 1980s, for the first time as a teenager. "How can such a shiny man end up in such a dark place?" She asks later.

in the To buryBritish photojournalist Charles Fox examines the same questions from a different angle. Like Carmichael, Fox worked with a Cambodian family – the Ramas – to tell a story that was both extraordinary and ordinary.

When the Khmer Rouge took over, Ky Kim Pean buried her family's photos behind her Battambang home. Play in To buryOf course, the album has a missing middle. The photographs ceased in the mid-1970s and were resumed in 1981 when the family was registered in a Thai refugee camp before traveling to the United States. Kim Pean's husband died, but she and all seven of her children survived. The life they are building as newly shaped American citizens is on the move. The buried photos – the family on the beach, the father as a stylish teenager – show signs of age. The newer ones are remarkable in their banality. Vira as a teenager, five years after escaping from the Khmer Rouge Eight-year-old Chandra and five-year-old Kamala dressed for the church shortly after their arrival in the United States. For the Rama family, leaving Cambodia seems to have helped them move on. Ket's daughter Neary wants to do the same. One afternoon she visits S-21 and begins to write a message for her father on the wall of his cell: "We're leaving."

When the clouds fell from the sky: A daughter's search for her father on the battlefields of Cambodia
Robert Carmichael
Little, Brown 368 pp £ 20

Abby Seiff is a journalist for religion, politics and the environment in Southeast Asia.