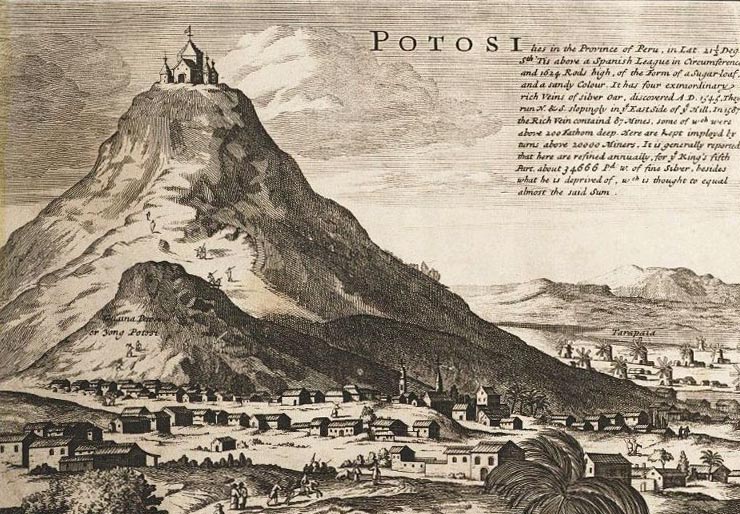 A dry, cold, desolate mountain in the high Andes seems an unlikely place for a city that had 120,000 inhabitants at the end of the 16th century and was three times the size of London. Potosí's phenomenal growth at 4,000 meters was based on huge silver deposits found in the towering Cerro Rico or Rich Hill in 1545. His reputation spread quickly and widely, with images of the city that reached into the Ottoman Empire in the 1580s and a few decades later on Chinese maps.

At the peak of production in the 1590s, approximately 200,000 kilograms of silver were mined each year. Potos & # 39; silver flooded the global market. The wealth created a stimulating demand for and the production of linen and fine fabrics from the Netherlands and France as well as silk and porcelain from China and cotton towels from India. It allowed Spain to wage expensive European wars and to defeat the Ottomans.

Potos & # 39; fame didn't just depend on his wealth. It was notorious for the appalling conditions under which miners, ore miners and smelters worked. Printed illustrations of the work in the mines promoted Potosí's image as the "mouth of hell" and fueled the Black Legend, which the Spaniards considered cruel and greedy.

It is not surprising that scientists in general have focused on Potosí from an economic and global perspective. Kris Lane emphasizes how the local was connected to the global and focuses on everyday life in the mines and in the city. From the discovery of silver to 1825, he uses personal stories from original sources to tell how elite merchants, civil servants and mine owners ran over their shoulders with African slaves, locals and migrants. It also shows that like all mining border towns, Potosí was a violent, immoral and polluted place, but at the same time it was dynamic, opulent and offered opportunities for social advancement. It was a huge consumer market, the need for miners like thick clothes, Chicha (Corn beer) and coca (to enable work in the diluted air and to suppress hunger).

Even if Cerro Rico may not have cost the eight million lives that Uruguayan journalist Eduardo Galeano wrote in the Open veins in Latin America (1971) work in mines and smelters was dangerous and the death toll was high. This was not the only human award, as Lane shows. The effects of labor mobilization among the Spaniards were also significant. From 1570, 13,500 men a year from indigenous villages from Cuzco in Peru to Tarifa in today's Argentina disrupted agricultural activities, separated families and destroyed community life, and attempts to escape were made. Local leaders who were responsible for meeting the quotas often had to make replacements. A leader claimed he had to sell his mules and llamas and even mortgage his daughter to a Spaniard.

Lane also addresses the environmental impacts of mining, which are evident in the polluted, scarred landscape that we see today and other disasters such as floods, food shortages and epidemics. The book reflects the mining background of the author and describes how engineers of different nationalities tried to deal with the technical challenges of mining and mineral processing in Potosí. As this beautifully written book shows, the costs and benefits of globalization are not limited to their historical moment.

Linda Newson is director of the Institute for Latin American Studies at the University of London.